What to do with extra cherries

I consulted the Outstanding in the Field cookbook that I recently received as a gift from my friend, Starr, author of the Rainy Day Ranch blog.  They had a recipe for grilled squab with sweet and sour cherries.  Perfect.

Except the only way I could think of finding squab would be to head over to City Park with a shotgun -- a flawed method sure to get me arrested.  Unwilling to drive to Whole Foods to buy frozen quail or cornish game hens, I opted for a small chicken from Wheat Ridge Poultry, the people who supplied me with the 27 lb bird for Canadian Thanksgiving last year. 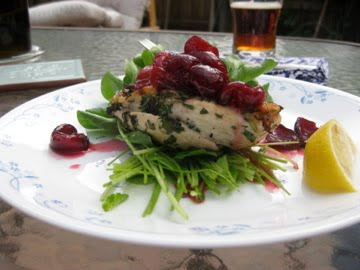 Posted by speakeasy kitchen at 9:12 PM