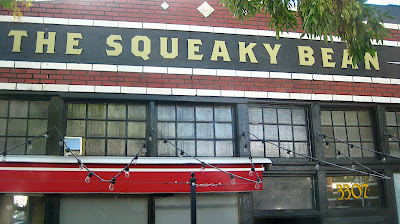 It is no secret that the Squeaky Bean in our neighborhood has a brilliant chef and a fun atmosphere to boot.  They don't exactly boast, but they have quite a following.  So much so, that when they announced a Monday night farm dinner at Aspen Moon Farm in Longmont, CO, they were able to pack a coach bus full of patrons in no time.

Now, we Roses are not characteristically on time for anything.  But Squeaky Bean says the bus departs from 33rd and Tejon at 5 p.m., and we were there by 4:50 p.m.  It was perfect timing to get a Colorado Peach Bellini down our gullets before getting on the bus. 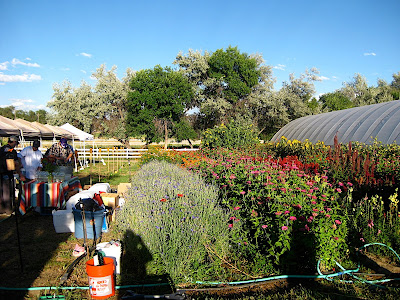 Aspen Moon Farms is a lovely, young, family farm that produces all the produce they serve at the Squeaky Bean.  Venue Bistro, Colt & Gray, Duo Restaurant, and the Masterpiece Delicatessen were also representing. 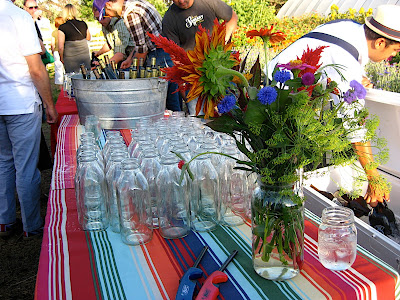 When we arrived, everything was perfect.  The sun was making its way to the horizon.  The tables were set.  Beverages were chilling. 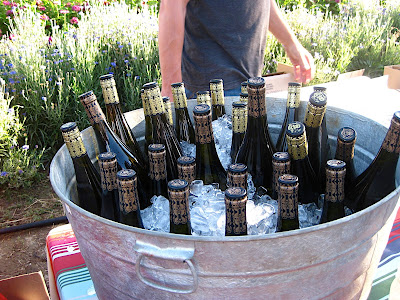 With cocktails in hand, we took to the fields for a tour of the farm. 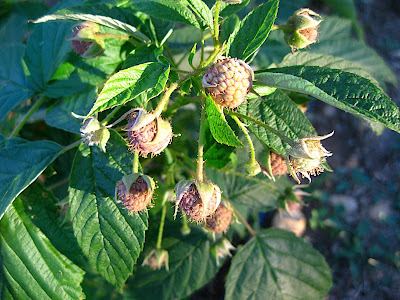 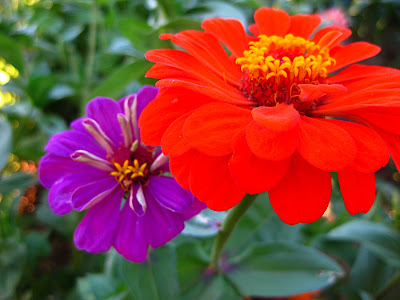 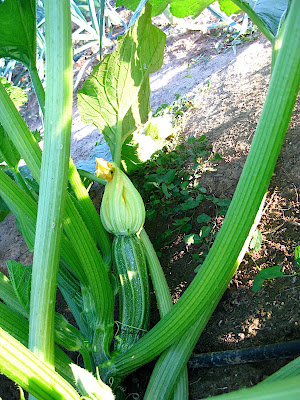 The Aspen Moon farmers were not reticent to share everything they could about what they had learned about organic farming.  They raised everything from zinnias to zucchini... 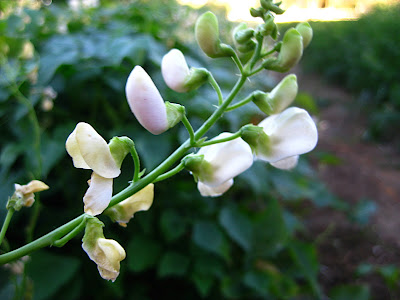 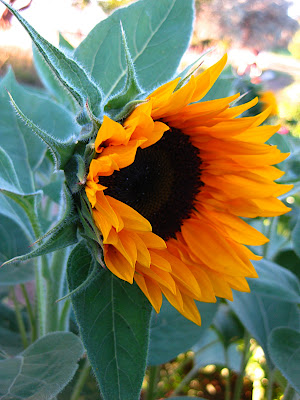 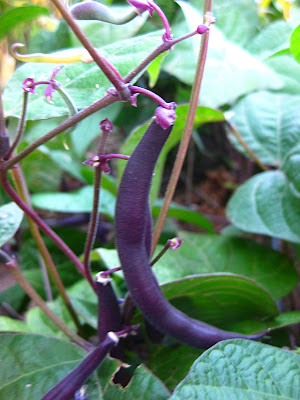 ... and snap peas to purple beans.
Despite the excellent agricultural education, we were all hungry, and focused on the greater task at hand. 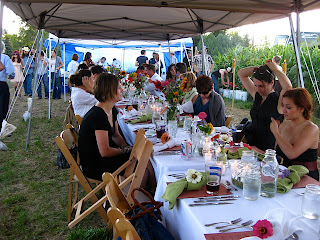 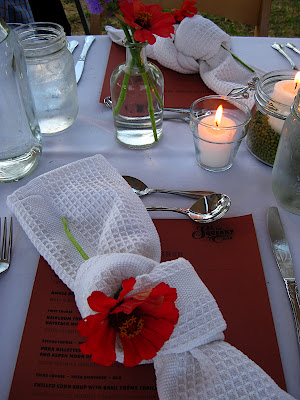 We sat down with fellow diners at a long table, and soaked up the beautiful setting while an accordianist entertained us with her enchanting voice, accompanied by her trusty squeezebox. 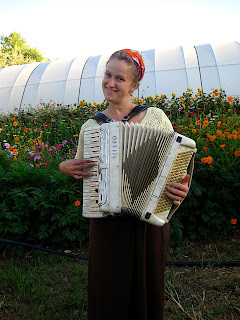 Then the festivities really began when the amuse bouche came out.  An egg custard with finely diced new potatoes and figs.  Does anyone recognize the plating from a certain MasterChef Top 24 finalist?  I cannot tell you how vindicating it was to have this served to me and 50+ other dinner guests who'd paid good money for dinner that night. 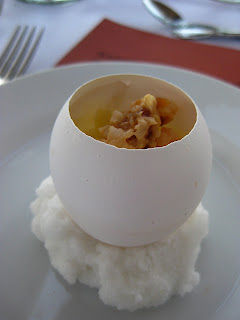 Next came the first course, by Venue Bistro.  It was a salad of heirloom tomatoes with fine herbs vinaigrette, Haystack Mountain Snowdrop, and a focaccia tuille, paired with Infinite Monkey Theorem Chardonnay from 2009. 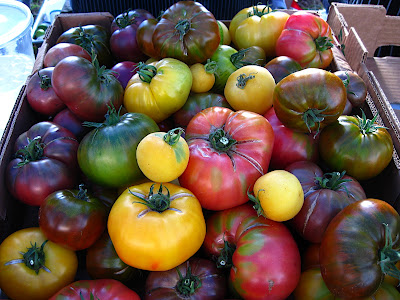 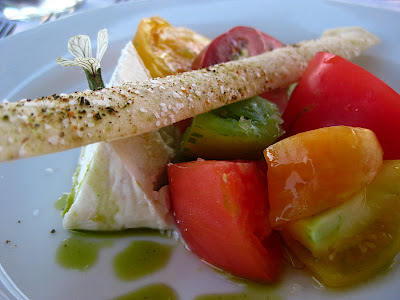 The second course was by Colt & Gray.  Pork rillettes with grilled bread, peach compote and Aspen Moon greens, paired with Infinite Monkey Theorem Riesling.  Now I'm not one for rieslings, but this was the perfect wine for the porky goodness of the second course. 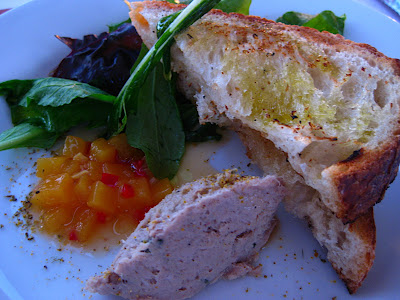 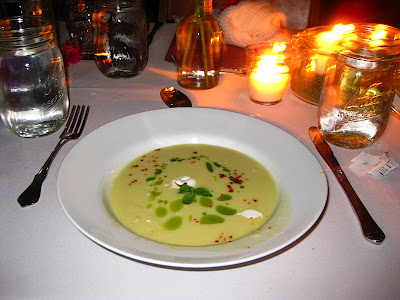 That's when it started to get dark.  Then came the fourth course, the Squeaky Bean's kale-wrapped chicken sous-vide with ratatouille terrine and squash blossom stuffed with a tomato cream foam, paired with Infinite Monkey Theorem cabernet franc.  I'm not ordinarily a big fan of ratatouille, but this was the tastiest thing on the plate and I would eat it any day of the week.  It was divine. 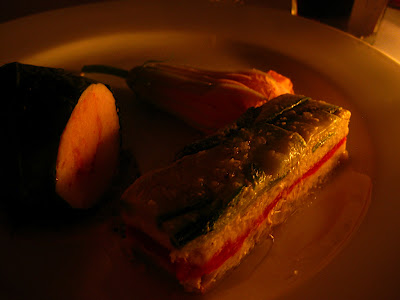 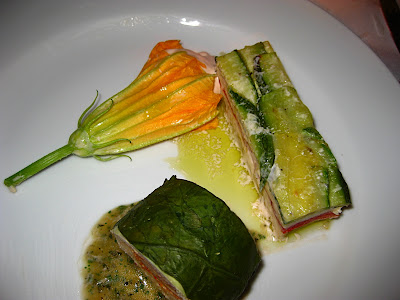 And finally, just as it was starting to get chilly in the Colorado late-summer night, the Masterpiece Delicatessen rolled out its whiskey baba with peaches and creme anglais, paired with Stranahan's Whiskey.  Just what we needed to keep us warm. 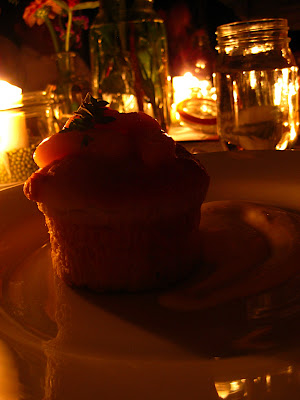 Before we knew it, it was time to head back to the Highlands.  Reluctantly, we and our dining companions pushed back from the table, took one last nostalgic look at the candlelit setting, and stepped aboard the same bus that brought us to this magical place, Aspen Moon Farm. 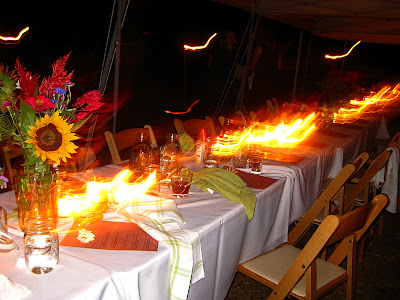 With a little bit of diligence, we'll get ourselves on the guest list just one more time before the farm closes up for the winter.


Posted by speakeasy kitchen at 8:24 PM