The unfortunate timing of 5280 Week.

It started so innocently. All I wanted was to put in a few inexpensive finishing touches -- additional lighting, polished floors, and plumbing the second sink. Mr. Rose installed recessed lighting while I was out of town for a girls weekend getaway. He got to plumbing the second sink and I stopped him -- why not finish the floors first? There's a layer of oak under here somewhere. We just have to unveil it and polish it... right?

So we got to work and started tearing away at the vinyl sheeting. Then the second layer of vinyl sheeting. Then the particle board subfloor. Then the second layer of subfloor... you see where this is going. Then we got to the linoleum-asbestos tile, which was glued down to the oak. We're not people who are prone to panic about a material as inert as asbestos, but it quickly became apparent that in order to get to the oak, we'd have to free the asbestos by sanding it off. We had industrial dust masks that were made for asbestos remediation. And we had already taped off the kitchen from the rest of the house to prevent the dust from getting everywhere. But I just didn't want the oak (which wasn't even the first and original layer of floor) that badly.

Which meant that we had to put in new flooring. We'd had some plans, off in the distant future, to replace the cabinets. But there was no time like the present, as long as we were re-doing the floors. We moved decisively, ripping out the cabinets and tearing the floor down to the joists, until all that was left was a 14' x 24' box with an wavy bottom surface, or no bottom surface at all. Mr. Rose ingeniously went to the cellar under the kitchen and jacked up several areas under the floor. And now, we're finally ready to lay down a subfloor.

Here we are, two weeks after embarking on a flooring adventure, with the entire contents of our kitchen spilled out into the dining room and living room. Kitchen cabinets have not yet been ordered, so they are no less than 8-10 weeks away. I thought this blog would subsist on restaurant reviews for a while.

But, it's Restaurant Week, known in Mile-High City as 5280 Week. During 5280 Week, all of Denver's best restaurants are putting out a mediocre three-course meal for two people for $52.80, served by over-extended waitstaff who likely also despise Restaurant Week (which unfortunately spans two weeks) as much as I do. It's not fair to review a restaurant on Restaurant Week. Everyone's reviews are bound to be merde (my last Restaurant Week dinner was at Bistro Vendome, where dinner for 2 took 3 hours because our waiter nowhere to be found, but when he did show up, he arrived with cold, overcooked, albeit delicious, cod, and because we ordered off the 5280 menu, dinner came to $130). This was bad timing indeed.

So. I need a new plan while I am sans cuisine. Now soliciting kitchens. If you have an under-utilized kitchen in Denver, perhaps you could give me a call and I'll come over and cook, eh?
Posted by speakeasy kitchen at 8:48 AM 6 comments:

Cheddar and chive biscuits are divine.

Please don't write me off as a blogger because I can't remember to take pictures. Please forgive me for being a chef first, eater second, blogger third, and photographer last!

I was invited to J&M's cabin for a girls' weekend getaway last weekend and we had a blast, drinking wine and eating cheese, while cooking. I made these awesome biscuits that rose as tall as they were big around in diameter -- no small feat, considering the cabin was at over 9,400 ft -- high-altitude baking at its finest! They were cheddar and chive biscuits and they were divine.

Here's the recipe (in exchange for forgiveness):

Preheat oven to 450 degrees F. In a medium bowl, combine flour, baking powder, baking soda, and salt. Mix well. With fingertips, rub the shortening and butter into the flour mixture until it's crumbly. Mix in the cheddar and chives. Gradually stir in the milk. The mixture will become a sticky ball. Turn the ball out onto a well-floured surface. Flatten out the dough and fold the dough it over onto itself a couple of times, using just enough flour so it doesn't stick. Press the dough out to a flat sheet about 3/4" thick. Cut the biscuits out with a 1-1/2" or 2" cutter (I used a champagne flute because that's all we had at the cabin -- that's how J rolls) and place the biscuits onto a cookie sheet with 1/2" between them -- just enough space so they don't touch. Reform remaining dough into another 3/4" thick sheet, working the dough as little as possible (so the biscuits from the second sheet will rise as well as the first). Bake till the biscuits are tall and just barely golden on top, about 15 minutes.
Posted by speakeasy kitchen at 11:25 PM 23 comments:

Cooking is my therapy

I'd be lying if I said that it doesn't bother me that I've been an infrequent blogger lately. It's partly the fact that I am a doer by nature, and not-doing makes me uneasy. It's also partly the fact that I've been doing a lot of other things instead that are less fun, namely day-job, day-job, and day-job. And then there's the fact that my blogging activity is directly correlated with the amount of cooking I'm doing, which means I haven't done much. I won't bore you with the details, but it's taken a toll on my sanity. I just haven't been feeling like myself -- I've been so cantankerous that I recently hissed "Boo!" to my secretary and he screamed like a girl. I threw back my head and cackled wickedly.


psy-cho-sis (si-ko-sis):
A severe mental disorder, with or without organic damage,
characterized by derangement of personality and
loss of contact with reality and
causing deterioration of normal social functioning.
So, with my sanity hanging by a thread, I invited a friend over, rolled up my sleeves, and went back to the therapy that cured my chef's block: Indian food. Old habits die hard -- no photography. But I had start from my roots. Just getting my hands, tools, and appliances dirty were a good start. The end result was a tasty haleem (lamb and lentil stew -- I used a recipe off Saveur that turned out to be quite bland and I had to go to heroic efforts to rescue it), saag paneer (there's something extremely therapeutic about curdling milk and turning it into cheese), and a pseudo-tandoori chicken (not bad considering I didn't have a tandoor oven). I started to feel a little better.

Three days later, I got a bigger dose of therapy. Some friends, we'll call them the RBergs, brought over Susur Lee's cookbook, Susur: A Culinary Life. The book comes in two volumes that are bound together in a unique double-binding. The first volume talks all about techniques (or something... I never really looked at it) and contains some "basic" mini-recipes that Susur uses as part of whole recipes contained in the second volume. The recipes in the second volume were accompanied by photographs of fantastical food, assembled so that looked akin to sci-fi-Chinese-food-meets-molecular-gastronomy, even where the cooking methods employed were mostly traditional. RBerg and I laughed at how inaccessible the recipes were. Then, we picked the three recipes that contained the least obscure-sounding ingredients, and set off on a quest to find them.

We returned to the Speakeasy Kitchen feeling pretty triumphant. We hit 4 different stores for the ingredients, substituting only the licorice powder with ground star anise because we just didn't feel like going to the apothecary across town. With the cookbook open before us, it seemed that we may have bitten off more than we could chew by attempting three recipes. 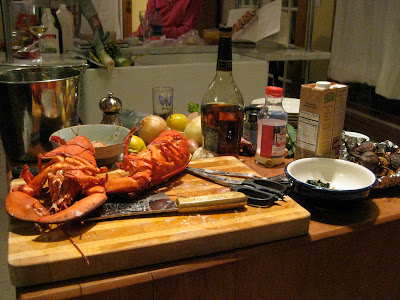 I mean, it was just sheer, mad chaos in here.  Little bowls of partially mixed ingredients, 18 piles of perfectly julienned vegetables, and hot, scalding lobster juice splashed all over the place.
But before too long, my instincts kicked in, and before I knew it, we were straying from Susur's instructions.
For instance, Susur doesn't know squat about how to make spinach pasta. Or mayonnaise.
And he certainly doesn't care about the distinction between paprikas. Or chorizos. And he uses ridiculous things as "garnish," like lobster.
There was a glaring and unforgivable absence of salt, stingy use of some flavor-imparting ingredients (like fermented black beans), and failure to appreciate how other ingredients could be used more efficiently (like saffron). Yeah, that's right, Susie. I'm calling you out.

But these errors and omissions did not go unnoticed or uncorrected. I reached down deep and I made it all better. It was like Susur's ludicrous recipes were a culinary case study into insanity that was reflective of my my non-culinary-driven insanity. It was an opportunity to sort out my head, heart, and soul.

It's a good thing I got one big cooking project out of my system because Mr. Rose has embarked on a massive kitchen renovation project... On the one hand, these are some much-needed improvements. On the other hand, it means the doctor is out. If I show up at your doorstep wielding a spatula and a crazed look in my eyes, don't panic. Just step aside, show me to your kitchen, and let me saute something. I'll be back to normal in no time. 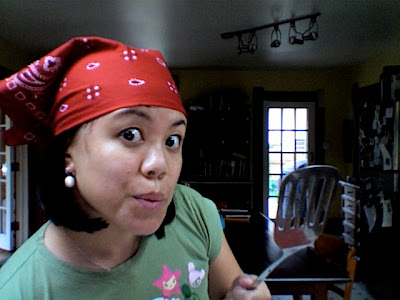 Posted by speakeasy kitchen at 6:47 AM 5 comments: