Tahini... it's not just for hummus

The problem with sweets, to me, is not only that they're lacking in umami, but from a nutritional standpoint, they're not much more than empty carbs which leave you hungry shortly thereafter.  And when you eat as often and in such quantities as I do, that can be a problem (even assuming that I like being pudgy, I cannot afford the time or expense to continually buy bigger clothes!).

Now, let's say you've just had a big cookout, and, as with every other cookout, there are people who fear those carbs so much that they eat hamburgers with a knife and fork, leaving you with lots of leftover hamburger buns.  What do you do? 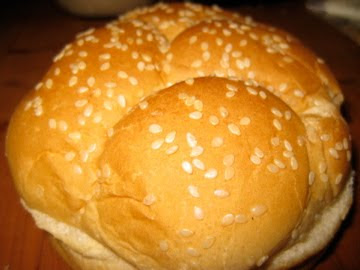 In this kitchen, when life hands me lemons, I make lemonade.  And when life hands me bread, I make bread pudding.  The question is, when life hands me bread in the form of sesame seed buns, what am I supposed to do?  Do I painstakingly pick them off, one seed at a time?  I may be Chinese and I may be cheap labor (read: lowly government worker), but my time is certainly still more valuable than that.  Do I leave them on and hope no one notices the sesame seeds stuck in their teeth?  I'm a voracious eater who happens to love the texture of gristle and could chomp from end to end through a steak without giving a second thought to odd textures but I think even I would notice sesame seeds in a bread pudding.

Rather than hiding the sesame seeds in a chocolate bread pudding, I would enhance them by adding tahini.  It's a very if-you-can't-beat 'em-join-'em approach to the problem. 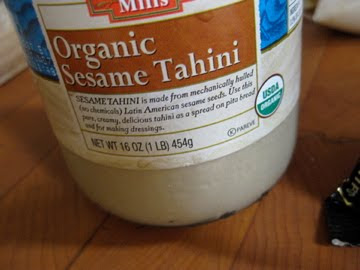 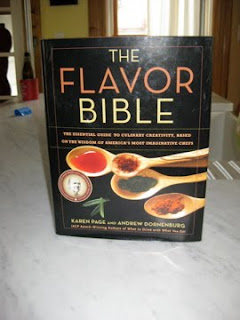 And it could be fatally flawed.  I checked The Flavor Bible.
I looked under "chocolate" and nowhere in the exhaustive four-page entry on chocolate did sesame even show up.  Cross-reference under "sesame" -- two columns dedicated to black and white sesame seeds and chocolate was under neither one.

Well, as they say, nothing ventured, nothing gained.


And so it was that this intrepid chef came to invent the dessert that protein-lovers could enjoy: Sesame chocolate bread pudding. 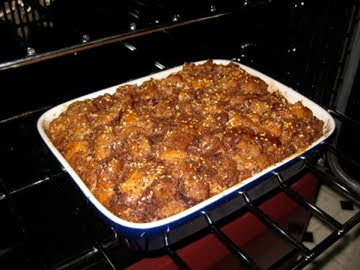 The result -- dessert with umami goodness. 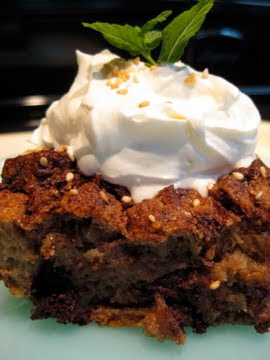 Serve the pudding warm, or refrigerate and serve chilled with whipped cream. 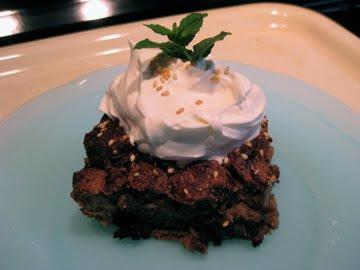 Posted by speakeasy kitchen at 3:29 PM