It would not be a Thanksgiving feast if there were not heaps of leftovers to provide you with the challenge of how to make them into something delicious but different by the end of the first week.  It also would not be a Thanksgiving feast if some version of turkey pot pie was not attempted.  This year, we had turkey pot pies AND turkey empanadas. 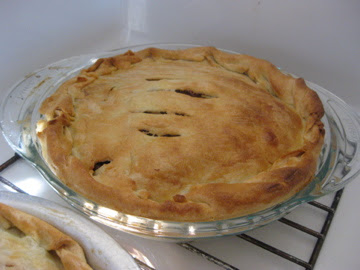 They were stuffed with the same mixture of turkey and vegetables, but something about the portability of the empanadas make them an attractive option.  Maybe it's the grab 'n' go single-serving aspect of them.  Maybe it's the fact that they remind me of the delicious alternative-to-dollar-slice-pizza late-night snacks that I used to enjoy across from the 18th Street Lounge after a long night of, um, lounging.  Maybe it's just another vehicle by which to dispose of delicious deep-fried turkey. 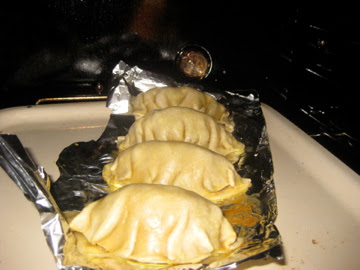 Either way, the pastry dough I came up with was versatile enough to serve as both double crust pie and empanada dough.  The recipe creates a light and crispy crust, a perfect envelope for the savory filling.  In hindsight, I should have made a gravy to mix in with the pie filling (it wouldn't be necessary or, for that matter, neat for the empanadas), but the pies were not dry and were tasty nonetheless. 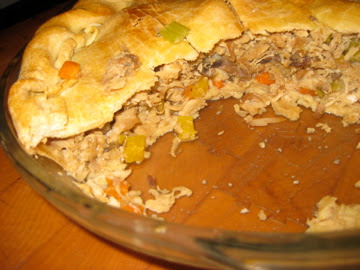 Here's how to do it.

Pulse flour, 2 eggs, and butter in a food processor until well mixed.  Gradually add water through the feed tube, pulsing until the dough just comes together in a clumpy ball.  Take the dough out, press it into a ball, then wrap tightly with plastic wrap and let sit for at least 30 minutes in the fridge.  Over medium-high heat, sautee the mushrooms in the olive oil (I had the foresight to do this step in two deep-sided skillets -- this recipe simply makes two much to fit into one).  Once brown, add the onions, carrots, and celery, and sautee till tender.  Add the shredded turkey, broth, coriander, and salt/pepper to taste.  Stir to incorporate, lower heat, and let simmer under a lid for 10 minutes.  Then remove lid to let cool.

Preheat oven to 400 degrees F.  Unwrap the dough and roll out as thinly as possible on a lightly floured surface.  Cut four pieces to fit two pie pans such that some dough flops over the sides of the pan.  Set aside the remainder of the dough for empanadas.  Press one piece of dough into the bottom of a pie pan.  Fill the pie pan with cooled turkey filling.  Lay a second piece of dough over the pie pan.   Working around the edge of the pie pan, roll the edges of the first piece, together with the edges of the first piece, over the edge of the pie pan, and tuck the dough just between the side of the pan and the outer edge of the pie.  Cut some vents into the top pie crust.  In a small bowl, beat the remaining egg with 1 tbsp water to make an egg wash.  Brush the egg wash over the top crust.  Repeat with a second pie pan.  Bake for 20-30 minutes, until the top crust is golden and lightly browned.

For the empanadas, cut 6" diameter (or whatever sized bowl you can use as a template) circles out of the remaining dough.  Place a 1/2 c of turkey filling onto the center of each circle.  Fold the dough over and crimp the edges.  Lay the empanadas on a baking sheet lined with foil and brush them with egg wash.  Bake for 15-20 minutes.

Let cool for 5 minutes, then serve, unless you like burning off the roof of your mouth (ahem, Mr. Rose).
Posted by speakeasy kitchen at 3:49 PM