When we first moved to Denver as an unmarried couple a few years ago, Mr. Rose and I still fancied ourselves as young and hip and would find ourselves roaming around downtown on weekends, looking for a hot spot to cut some rug.  We stumbled upon a very cool space that just didn't live up to expectation on 14th between Market and Larmier, Martini Ranch.

It was filled with young women with bleached blonde hair, wearing barely more than bikinis, tottering around in impossibly high heels, gyrating as seductively as they could for the crowd of men, young and old, who stood on the sidelines, watching intently, tottering drunkenly, and, perhaps, wishing they had enough rhythm to join the ladies on the dance floor.  It was a sad, sad place, but everyone there seemed content.  For the price of a double, the bartender would always pour a triple, and every person that entered Martini Ranch could reliably expect to exit with permanent hearing damage and promises of a serious hangover the next morning.

Eventually, Martini Ranch shuttered its doors.  Perhaps the business model of pouring triples for the price of a double at a seedy dive bar dressed up as an exclusive night club was not sustainable.  I don't know.  I'm not in the business.  And, I am apparently old and judgmental about these places and the people who frequent them anyway.

But then, Euclid Hall came along and filled the void that Martini Ranch had left in the Larimer Square-ish location.  Touted as one of the best new restaurants in Denver by 5280 Magazine, I was pretty excited when Skywalker suggested that we try it on Saturday night.  This time, I remembered my camera. 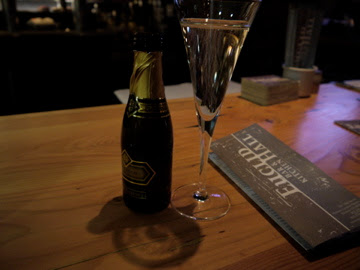 We had a drink at the bar next to the open kitchen while we waited for a table.  From my crowded perch at the bar, I could see plates waiting to be picked up by servers.  It was a very exciting place to be.  I didn't see anything thrilling pass from kitchen to bar, but it was still exciting to be there amid the action. 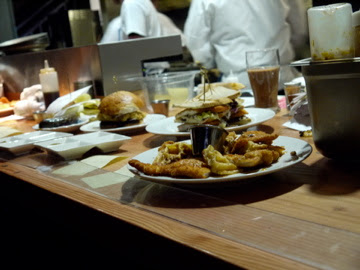 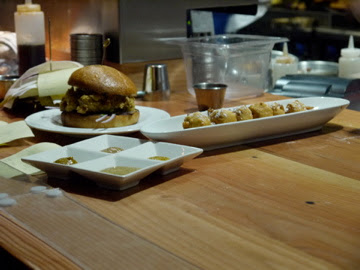 We were seated at a cozy booth and spent a little time perusing the menu.  I think it could best be placed in the new "gastropub" category of cuisines.  My eyes quickly gravitated toward the Crispy Buffalo-Style Pig Ears and Brulee Bone Marrow, probably because I'm Chinese, and Mr. Rose honed in on the Pickle Sampler.  We added Fish N Chips to our order, upon the recommendation of our server, and Skywalker chimed in with an order of the Wild Mushroom Poutine.

The pig ears came first.  This was my first disappointment of the evening.  The little basket of pig ear strips had a mostly hearty crunch (they were, after all, deep-fried), but once my teeth made their way through the unseasoned batter, they met with a mush that I can only guess was the fatty skin of pig ears.  Crunchy batter around a mushy nothingness... the overall effect was definitely not what I'd call crispy, which is surprising since pig ears naturally already have a bit of a satisfying crunchy mouth-feel.  The buffalo sauce and ranch dressing a la carte were also underwhelming.  Not sure how the brilliant idea of crispy buffalo pig ears went wrong, but it did. 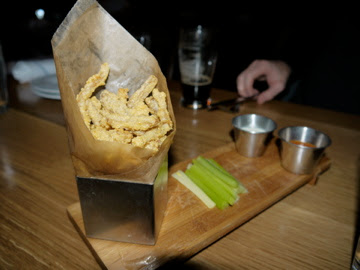 Next up was the bruleed bone marrow.  The portion of actual marrow was small, maybe a teaspoon.  As with the pig ear batter, it was under-seasoned, but the marrow was rich enough that it was not entirely flat.  The slivered onions and sweet sherry reduction hidden under the bone went a long way to helping this dish.  Unfortunately, as the sherry reduction was hidden, I didn't discover it till the very end, when I was pushing the bone around the plate, wishing there were more than a diminutive bite of marrow in it. 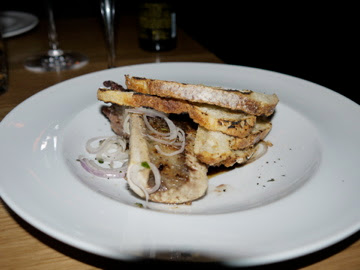 The fish and chips were unremarkable.  I expected there to be something amazing about this dish, since our server especially recommended it as a "definite must-have."  True, it was perfectly cooked, but it's the least I'd expect considering the pedigree of Euclid Hall.  Also true that it was served with a dark malt vinegar gastrique and lemon tarragon ailoi, but these sauces did not elevate the fish'n'chips to anything I would have called a "must-have."  It seems our server had a way with hyperbole. 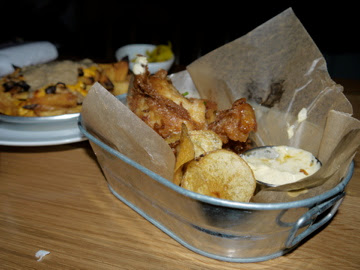 In addition to being Chinese, I am also Canadian.  And I went to school in Quebec.  So it's difficult to pass up a poutine when I see it on a menu.  Skywalker was a poutine virgin and I was thrilled to be present during the popping of another culinary cherry.  But here's a poutine I wished we hadn't ordered.  This poutine is the reason poutine has a bad reputation of being a foul sludge that clogs the arteries; actually, it's always been true that poutine will clog your arteries, but it's never a foul sludge.  C'mon!  It's french fries, cheese curds, and gravy!  That screams delicious(!), not "foul sludge."  But Euclid Hall managed to take it to that level.  They were skimpy on the cheese, without enough to create the trail of melted cheese strings one expects as one pulls each french fry away from the pile.  I could have overlooked this transgression if they'd gotten the gravy right.  As a mycophile, I applaud the idea of making a mushroom gravy.  But the "gravy" was a lumpy mushroom puree, a sorry failure in the execution of mushroom gravy.  Don't just take my word for it.  See the lumpy, amorphous tan blanket over a pile of fries below. 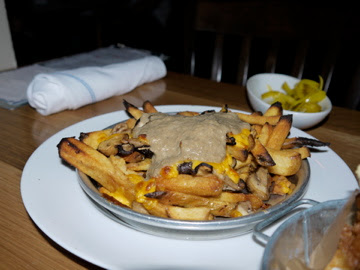 It's difficult to say that Euclid Hall was a negative dining experience because it truly did have a vibrant and inviting atmosphere.  Couple that with the fact that it was created by one of Denver's favorite chef-restauranteurs -- we really wanted to love it.  But it just didn't live up to the hype.

Well, at least it's better than Martini Ranch.
Posted by speakeasy kitchen at 6:06 PM