As American as cherry cobbler

Ku asked us to dogsit for 3 weeks.  Not a problem -- Max and Maya collectively weigh as much as our little Margo Frances, so it would be (in theory) like having 4 dogs in the house, not 5. 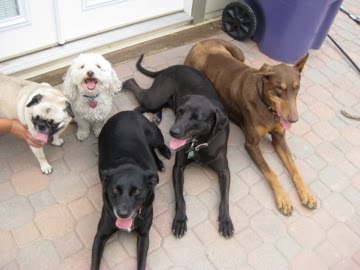 Not so.  Maya, the heavy-breathing pug, appears not to know her name, especially not in combination with commands like "sit" and "come" or "no."  And, despite her labored breathing, she is really active and quick on her feet.  She is constantly in motion.  Max, sweet and responsive to commands as he is, is really intent on lifting his leg on our raised vegetable garden.  We've had more than 5 dogs in the house before, but never did it seem like this much activity.  Ku didn't warn me that her pups were so unruly.

I could be mad at her, except that (a) the unruly pups are so darn cute(!) and (b) she brought 3 lbs of sour cherries that she'd picked from the tree outside of her townhome,  HOA rules be damned.  Ku picked these tart and juicy cherries from communal property, at the risk of being glared at by snooping neighbors and, perhaps, a stern warning from the president of the HOA.  It was a bold act that brought to mind an old American story, that young George Washington, chopping down a cherry tree.  How very American was this gift of illicit sour cherries on the eve of this great nation's birthday! 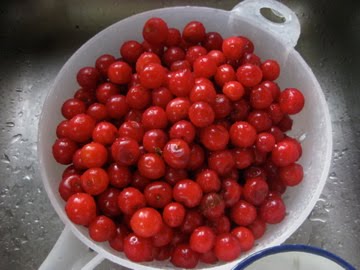 Three pounds of little sour cherries are a lot of work to de-stone, especially when one does not possess a stoner.  It's well worth the money, but it was late and I was not in the mood to run to the store.  So I let the dogs out into the garden, with hopes that Mr. Rose's watchful eye would ensure that my kale would not get peed on, and set myself to work pitting cherries.  I used this Epicurious recipe roughly, though I had a 10" cast iron skillet so I had to increase my quantities a bit, and I used a convection oven, so baking times were decreased.

Remove pits from the cherries and reserving the cherries and any juices in a large bowl.  Stir the cornstarch, 1 cup of the sugar, the lemon juice, and almond extract into the cherries.  In a small bowl stir together the flour, the baking powder, the salt, the remaining 3 tablespoons sugar, and the butter, blend the mixture until it resembles coarse meal, and stir in 1/3 cup boiling water, stirring until the batter is just combined. In a 10" cast iron skillet or flameproof baking dish bring the cherry mixture to a boil, drop the batter by heaping tablespoons onto it, and bake the cobbler in the middle of a preheated 350°F convection oven for 30-40 minutes, or until the top is golden. 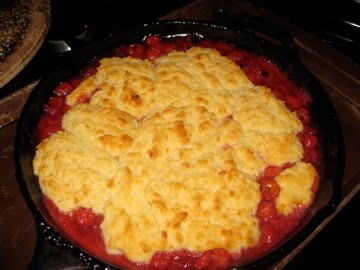 The recipe calls for a peach and brown sugar ice cream pairing.  I will, instead, chop some peaches up into a thick Greek yogurt sweetened with honey, and throw that into my ice cream maker for a peach and honey frozen yogurt.  It may be no less fattening, but it feels like a more refreshing dessert on a hot day.  All together, it'll be a mouth-watering, tangy dessert, crisp and toasty on the outside, warm and gooey on the inside, and topped with a smooth and soft peachy yogurt.  YUM!

I love the weight a cobbler in a cast iron skillet.  It has gravity.  It makes me feel like I am doing something serious.  And it has a rustic, old-timey feel to it, as if I were making a cobbler for Mr. Washington himself.  So there it is, my patriotic American dessert for a July 4th celebration on my 10th year in the country.  No, it's not apple pie.  But not half bad for an immigrant in a country full of immigrants.
Posted by speakeasy kitchen at 5:46 AM