No one remembers liking beets when they were kids, and I'm no different.  I only ever saw them at the all-u-can-eat salad bars at the Ponderosa "steak house" and The Sizzler, on display under florescent light and a sneeze guard.  They were gelatinous-looking, circular slabs with an unnatural magenta hue.  I always watched in awe as Dad popped them into his mouth by the forkfuls, waiting to see if he'd spit them out.  Being a kid who thought green jello was cool, I can't explain why beets weren't. But then again, I was a complex kid, full of contradictions.

Now fast-forward to a new decade, 2010, when I buy anything that looks pretty in the produce section and find a way to make it taste as good as it looks. 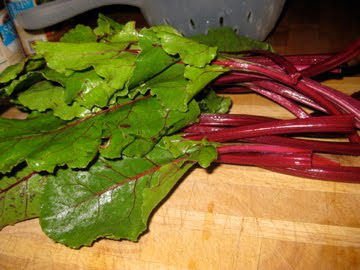 For me, the beet greens are the loveliest part of the beet.  They're almost magical, with bright green leaves springing forth from the red stems and veins that, when you cut them, bleed hot pink.  And, invisible to the naked eye are the beta-carotene, vitamin C, iron and calcium that they also bring to the table. 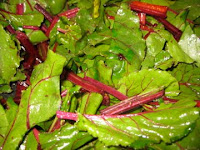 I separate the beets from the greens, wrap the beets in foil, and roast them at 400 degrees F till they're just tender.  The greens, I chop and saute in olive oil with a pinch of salt, till wilted.

The beets come out of the oven and get diced.  Beets and greens are reunited, and tossed with extra virgin olive oil and peach-fused white balsamic vinegar from a local purveyor and topped with crumbly gorgonzola and sunflower seeds for the best salad love can make. 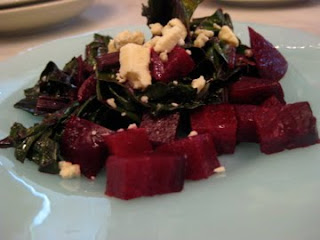 Kind of makes me wonder what I could do with green jello if I put my mind to it.
Posted by speakeasy kitchen at 9:32 AM