I can't even take credit for this creation.  It was born of an Alton Brown recipe and a modest amount of creativity, driven by a meager selection of items at the store.

The theme for yesterday's supper club was "White Trash Picnic," complete with cheap beer, coke cake (it's a southern thang), and cornhole.  My task: macaroni and cheese.  Yes, someone brought Popeye's fried chicken, which we all ate without remorse.  And I didn't really believe anyone would trash-talk me for bringing a pot of Kraft Dinner... or at least not to my face... but I thought I should at least make a mac-n-cheese from semi-scratch, using preformed elbow macaroni and preshredded cheese.

Now there's more than one way to skin this cat so I had a few options.  I chose to go with Alton Brown's recipe because Mr. Brown said it would only take 25 minutes and the supper club was convening on a weeknight, so I didn't have a whole day to prep.  And nothing says "white trash" louder to me than a quickie recipe that involves preshredded cheese and a can of evaporated milk. 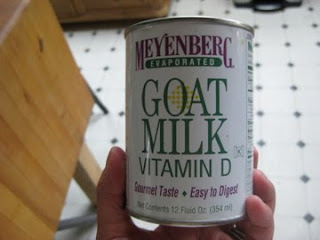 The Sunflower Market four blocks from the Speakeasy Kitchen doesn't always have the "normal things" you see at grocery stores (incidentally, this is really the reason I didn't want to bring Kraft Dinner -- they don't carry that either).  I scoured the aisles in search of evaporated milk and found only this stuff: Evaporated goat milk.  "Gourmet Taste. Easy to Digest."

Crunched for time, I decided to give it a whirl.

I cooked the macaroni and went about mixing the goat milk, which had an yellowy-pinkish color, with the eggs, mustard, and hot sauce. 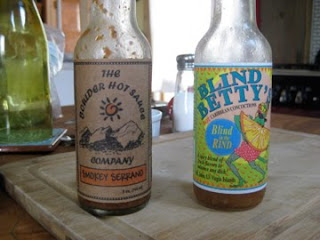 For hot sauce, I had a couple of choices.  Although the crazy colors on the Blind Betty's hot sauce looked appropriate for the occasion, I opted for the Boulder Hot Sauce version because I figured the smoked serrano would be a nice flavor bridge between the goat milk and sharp cheddar.

I was right.  The result was a creamy, slightly goaty cheddar mac-n-cheese that was quick and easy.  Pleased with the results, I donned my wife-beater and giant belt buckle and headed to the park, bringing my cornhole and trash-talking A-game and the best mac-n-cheese I've ever eaten. 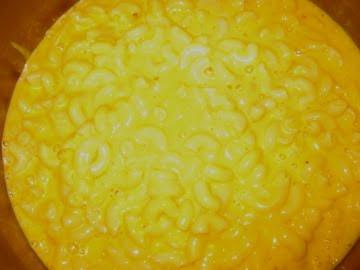 Posted by speakeasy kitchen at 1:47 PM