The fate of a shrimp in endangered habitat 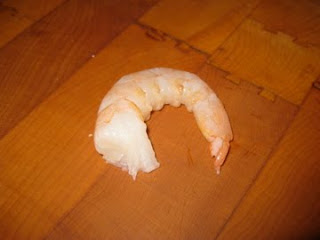 It's not entirely clear to me how it came to be that these pink shrimp were available "on special" at Seafood Landing.  They hail from the imperiled waters of the Gulf of Mexico, and although the species itself had a "stable" existence earlier this year, it's not hard to imagine that they'll be a little more scarce in the months and years to come.

So how did they find their way to this land-locked state, only to be placed on sale like they were going out of style?  Perhaps the shrimp trawlers sifted them all out of the water before they could meet their oil-slicked doom.  Or maybe Bruce foresaw the BP accident and made the biggest fishmonger futures trade boon in history and was sharing the wealth.  No matter what brought them here, I had Old Bay Seasoning and limes at home, waiting to make their sweet and tender acquaintance.  Together, with a few other accoutrements, they would become ceviche.

Last year, I met a Mexican civil rights lawyer-cum-painter named Clay.  He was helping me fix up my house in Washington DC.  We spent a week working side by side and, one day, we spontaneously decided to make ceviche for lunch.

It was a typical day in DC, hot and humid.  We were tired and hungry.  We had plenty of hardware, but no kitchen utensils.  But, where there's a will, there's a way.  A bathroom mirror came down and became our cutting board and a Swiss Army Tool our knife.  The lime juice was our sanitizer.  I felt like McGyver.

We butterflied the shrimp and soaked it in lime juice.  Thinly sliced onions and tomatoes went in to add more flavor and acidity.  Then a few splashes of soy sauce and a few dashes of Old Bay Seasoning.  We used a blow torch to toast thinly sliced garlic and crushed red pepper in a bit of sesame oil -- it smelled heavenly!  Ripped up some cilantro, sliced some avocados, tossed everything together with an extra squeeze of lime, and Voila!  It is the best thing I could possibly hope to see on the end of a tortilla chip heading towards my mouth.  Not to mention, it's hardly the worst possible fate for a shrimp from the Gulf of Mexico. 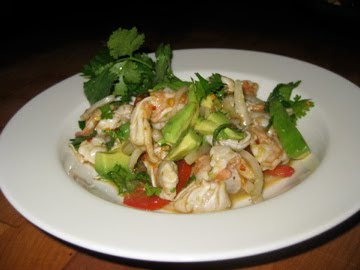 *N.B. This is a recipe (be)for(e environmental) disaster.  If shrimp becomes extinct, I do not recommend that you try this with raw chicken.
Posted by speakeasy kitchen at 9:47 PM