Training for a century requires that I spend a lot of time away from the kitchen and more time on the road.  But now that I've finished my first century, I finally realized that I am addicted to cycling.  It's like being a kid all over again -- spending hours outside, zoom zoom zooming around with no purpose other than to be out on my bike -- only better, because now I have a carbon fiber frame and sleek, moisture-wicking fabrics.  But that's not the only thing that's improved from when I was a kid.  The food's a helluva lot better too.  (No offense, Mom and Dad.)

It's been an alternately rainy and hot/sunny season in Denver, which makes cycling outdoors a bit of a challenge, but it's great for the garden.  Exhibit A: Photos from the herb garden. 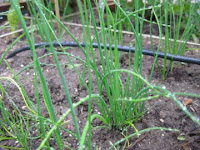 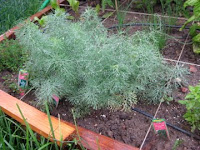 Chives and dill, from seed.

Most people look for recipes based on main ingredients.  "I'm in the mood for fish sticks," they'd think to themselves, and then Google "fish stick recipe 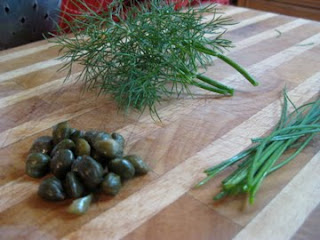 Snip, snip, snip!  Add some capers... Chop, chop, chop!  The recipe called for halibut, dipped in egg, and rolled in panko.  I have never been able to get egg to stick to anything without using a starch primer first.  So I lightly dredged the fish through some flour, before dipping in egg.  And because no one I know doesn't love panko, I pankoed with gusto. 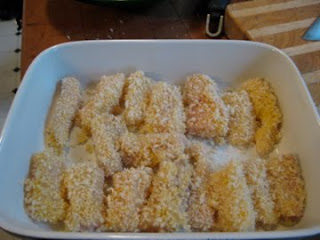 The results were wonderful.  I resisted the urge to dress up the bone china plate.  The grown-up version of fish sticks didn't need a sprig of dill to remind me of how far departed I am from the fish sticks of childhood. Next up: Roasted beet salad... not your average sliced canned beets at the salad bar.
Posted by speakeasy kitchen at 7:48 PM